One of the most popular soft drink beverages in Canada, Pepsi Cola, was once bottled in Kentville, from which point the drink was distributed throughout most of the Valley.

The old bottling plant rarely is remembered today; forgotten as well is the fact that the plant also produced a soft drink that may have been unique to this area.   As well as bottling Pepsi Cola, the Morris Bros. Bottling Co. produced a soft drink under its own label.  The Morris beverages bottle was once a familiar sight in county stores and canteens; and if you’re a senior, you probably recall that it came in several flavours.

Recently Roberts Meister called to ask if I knew anything about Kentville’s old Pepsi bottling plant.  Meister worked at the plant when he was a young man.  His job was to pour “special syrup into the Pepsi bottles.”  He recalls that he was required to put two ounces of syrup into every “10 or 12 ounces bottle of Pepsi.”

Meister placed the plant along west Main Street, on the south side, but he was unsure about its exact location.  However, he remembers names of people associated with the bottling plant.  The plant was owned by the Morris family, “Charlie, and Bill or Clarence,” he said, and one of the drivers was Cal Milne, who as readers may recall, ran a garage in New Minas.

Based on one of my brothers working at the Pepsi plant, I figured it had to be operational at least in the late 1930s and the early 1940s.  I remember as well sampling many a bottle of Morris pop.  However, after digging into my files and checking a few local history books, I came up with absolutely nothing on the Pepsi plant and Morris Bros. beverages.  I was surprised when checking Mabel Nichols Kentville history, The Devil’s Half Acre, that there was no mention of the Pepsi plant or Morris Bros. soft drinks in this book.

As a general rule, when anyone is stumped about some past Kentville event or if anyone needs to know something about an old Kentville business, it’s best to seek out historian and author Louis Comeau.  Comeau’s book, Historic Kentville, is the tip of the iceberg when it comes to what he knows about the town’s history.  As always, Louis came through when I inquired about the Pepsi plant and Morris Bros.  Here’s what he came up with:

The plant (which Louis believes may have opened circa 1923 but he isn’t certain) was located at the corner of Main Street and Masters Avenue.  The plant was housed in what was the former Methodist church building – which the Methodists stopped using, Louis says, when they united with the Presbyterians in 1923.

At the plant they bottled Morris beverages, which came in assorted flavours, the contents indicated on the bottle caps.  Later the plant bottled Pepsi Cola products, which they continued to do until it was closed in 1949.  A few years later the building was again used as a church.  The building was later moved to Masters Park.

Readers who may have additional information about the bottling plant are invited to share it with me.  Contact me at edwingcoleman@gmail.com. 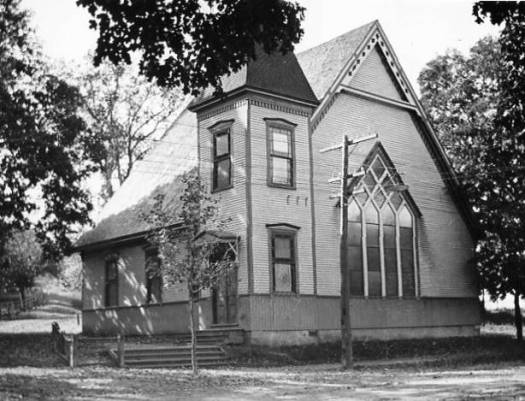 This former Methodist church was converted to a plant to bottle Pepsi Cola and Morris beverages.

Pepsi Cola and Morris beverages (above) were once bottled in Kentville. Note the Kentville location stamped on the Morris bottle. (Louis Comeau collection)