The success Dalton and others enjoyed apparently created an interest in fur farming here in Kings County. The folklore about long ago attempts to set up a fox farm on Boot Island in Grand Pre mention a Prince Edward Island connection, suggesting P.E.I. farmers and stock were involved.

In its heyday, when clothing markets world-wide were clamouring for wild animal pelts, the success of fox farming in places like P.E.I. led to serious attempts to commercially raise mink and other furbearers. A 1945 report on miscellaneous fur farms in Canada indicates besides mink and fox, Canadians attempted to commercially breed raccoon, marten, fisher, coyote, badger, fitch, beaver and lastly, the muskrat. In 1927 alone there were 172 muskrat farms in Canada. By 1938, according to Dominion Bureau of Statistics reports, most had folded.

There was a little known attempt here in Kings County to commercially raise muskrats. Muskrat farming was tried in Lower Canard in the late 1930s or early 1940s. The farm failed for various reasons and all that remains of it today are a few memories and a sign marking the ranch site. I discovered the site over 50 years ago. Puzzled by what seemed to be large pieces of sheet metal in a swamp off the Canard River, I asked around and was told I had found the fencing of a muskrat farm.

Information about the ranch has been hard to come by. Local talk has it the ranch failed in short order, leaving says local folklore a few embarrassed Kings County farmers in its wake. I have the names of people supposedly involved in the ranch but have been unable to confirm they were involved or how far along the enterprise got before it shut down.

Besides the folklore – call it folksy country gossip if you wish – and the sign marking the site near Jawbone Corner, the only concrete evidence of the muskrat farm’s existence I have is a letter dated November 23, 1944. I discovered the letter tucked in a book I was thumbing through at a yard sale; the letter was a reply from the Department of Lands and Forests to an inquiry about the legality of pelting muskrats kept in captivity.

From the letter’s content it was obvious a muskrat farm was being contemplated here. The letter was addressed to a Kings County farmer, a man local talk says was involved in the muskrat farm and was a major investor. That same local folklore says the farm failed soon after being established, the muskrats being excellent tunnelers quickly fleeing the ranch site despite the sheet metal fencing.

I’m still digging into the history of the muskrat farm and would like to hear from anyone familiar with it. I can be reached by email at edwingcoleman@gmail.com. 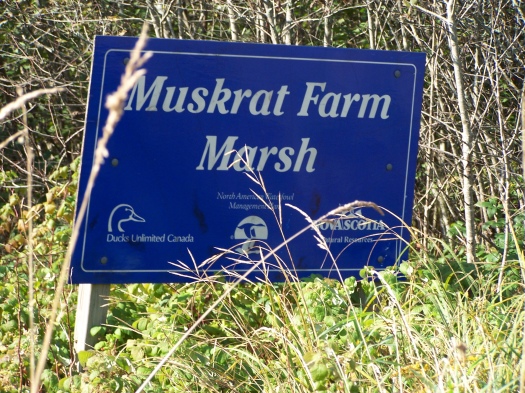 This sign in Lower Canard marks the site of an early attempt to set up a muskrat farm in Kings County. (E. Coleman)