“With 1942 in its first month, a brand new manual training shop on wheels, a hitherto untried method of bringing technical training to rural districts, set out on its mission.

“This first ‘shopmobile’ has already created attention outside the province.  The Department of Education has high hope it will give to the boys in farming communities elemental skills in the mechanical field …. providing a base for subsequent trade training.”

In a few words, this was the purpose of a “unique experiment,” a pioneering effort that began here in Kings County early in 1942.  The January 1942 issue of the Family Herald on this “experiment in rural education” said it originated when the Department of Education “discovered with shock that for over a century Nova Scotia had been educating boys and girls in rural districts away from the farm by giving them an education consisting almost entirely of book learning.”

This, the Department said, was preparing kids exclusively for college, overlooking a much greater need, especially in rural areas, for training in vocational and industrial arts.  The answer to this need was the shopmobile, a mobile vocational school that from 1942 to 1964 trained kids in rural areas, providing basic skill in manual arts.

In Kings County the shopmobile traveled the area from Kingsport to Greenwich, stopping once a week in every school district along the way.  It’s difficult to determine how many boys studied manual arts in the shopmobile (and it was boys only since the girls had a separate program in the schools).  However, I recently talked with a former rural school student who trained in a shopmobile during the 1940s and I got a glimpse of what it was like.

Arnold Burbidge of Centreville fondly remembers those weekly visits to his school in Canard.  Burbidge says he benefited greatly by studying  carpentry basics and small engine repair.  “Among several things, I remember making a whippletree for my father’s horse team to haul our sloven,” he said. The bus stopped every week at his school in Canard except in the spring. “When the roads were closed because of the spring thaw,” he recalls, “the shopmobile parked in Port Williams and you had to go to it.  I’d bike to the bus for the morning class and go back to our own school in the afternoon.”

This experiment in rural education, said to be unique to Nova Scotia, was possibly the first of its kind in Canada.  The shopmobile eventually evolved into a series of vocational schools around the province.  Look at those gleaming high tech halls of the Kingstec campus today. It’s difficult to imagine it  originally was a bus weighing several tons – a bus that was a self-contained carpentry shop, tool shop, machine shop, an iron working shop, a leatherworking shop, a plumbing shop and much more all rolled in one; a bus that  rumbled up and down rural roads in Kings County for 22 years.

In its early days the shopmobile, as it eventually came to be widely known, was called by many names since no one knew for sure what it actually was – for example it was called an industrial arts school on wheels, a mobile manual training shop, and a mobile vocational school.  These descriptions are self-explanatory but the Department of Education summed up the shopmobile’s role precisely:  “The shopmobile is capable of providing …. preparatory training for vocational schools and industrial arts,” stated the  Department at the time the first vehicle hit the road.

And hit the road it did to wide acclaim.  In fact the experimental in mobile vocational training worked so well that eventually five shopmobiles were built to serve other rural areas around the province.   But the experiment started first here and many kids who attended rural schools in Kings County fondly remember it. 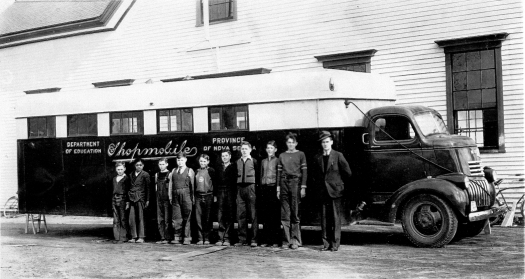 The shopmobile as it appeared in the early 1940s in Canard. Arnold Burbidge (fifth from the left) supplied this photograph. At the far right is George Adams, the first shopmobile instructor.