A landscape photograph a historian says is “an original Edson Graham hand-tinted print” has come to light in Ontario and the antique dealer discovering it believes it belongs back where it came from, the Annapolis Valley.

The print, titled “The Corner Brook,” is an example of the work Wolfville photographer Edson Graham did through the 1920s to the 1940s. The print was brought to my attention by the dealer who contacted me when a Google search brought up columns I wrote about Graham over a decade ago. “I acquired (this) original work of art… hand signed by Edson Graham and it is an amazing photograph,” the dealer wrote. “The print has been well preserved under glass all these years and is in wonderful condition. I knew it was special when I saw the frame it was in.”

While rarely remembered today, Edson Graham (1869-1956) worked as a photographer, first in the States, briefly in Truro, in Windsor and then in Wolfville where he remained for most of his working years. According to the Wolfville history, Mud Creek, Graham arrived in Wolfville in 1904, first managing the W. W. Robson photographic studio, later taking it over. One source, the 1985 book, An Atlantic Album, states that in 1905 Graham moved to Windsor where he lived and worked as a photographer for 40 years. However, Tom Sheppard, in his book Historic Wolfville, writes that Graham arrived in Wolfville in 1904 and from 1913 to 1944 lived in a house at 5 Acadia Street. Confirming what Sheppard stated, Mud Creek lists Graham as a member of the Wolfville Chamber of Commerce in 1939, a charter member of the Wolfville Rotary Club in 1935, a charter member of the Wolfville Historical Society in 1941 and a Wolfville town councilor in 1919 and 1920. Graham may have maintained a studio in Windsor after moving to Wolfville.

Photo historians such as Larry Keddy, New Minas, describe Graham’s work as being in the same class as his contemporary, the iconic Valley photographer, A. L. Hardy. “While Hardy may have a slight edge,” Keddy says, “they were both technically superb.” In the age before color photography, Hardy and Graham were experts in the art of tinting black and white photograph by hand, using photo oils. However, Keddy said, “Graham won awards for this type of work.”

As I pointed out in previous columns (column 1, column 2, column 3), Graham, like Hardy, is noted today for recording historic moments with his camera. One of the foremost Nova Scotia photographers of his time, he took hundreds of now historic railway photographs and countless photographs of people and places. At one time the photographs of Edson Graham, his landscapes, seascapes and railway pictures, were reproduced on postcards and circulated continent-wide. Like Hardy, Graham apparently delighted in capturing images of the Annapolis Valley in the era of sailing ships, ox teams and covered bridges.

Graham’s greatest claim to fame may simply be that he preserved for future generations countless images of the Valley and a lifestyle that has long since vanished. You may be able to see this yourself since the Wolfville Historical Society may hold an exhibit of Graham’s work. I’ve been informed that this is in the works, either this year or next, and hopefully it will come about. According to the Ontario antique dealer, the Society has expressed an interest in the print, The Corner Brook. If there is an exhibit and the print and similar works are there, you’ll find that Graham was an artist at creating tinted photographs.

A few facts and quotes on the photography of Edson Graham:

As noted by Tom Sheppard in his book, Historic Wolfville, “When Graham retired in 1945 the Chronicle Herald said his departure from the studio marked the passing of a landmark in local history. Over the years Sheppard wrote, quoting the newspaper, Graham took the photographs of nearly every Acadia student and Horton Academy students, as well as hundreds of groups on campus.”

On his Windsor connection, L. S. Loomer identifies Edson Graham as one of the town’s early photographers in his book, A Journey in History. Garth Vaughan’s book, Historic Windsor, contains a photograph clearly identified as one Graham took in Windsor in 1912.

Photo historian Larry Keddy on examining a color copy of Grahams photograph, The Corner Brook: “This is an original Edson Graham print which started out life as a black and white photograph on fibre based paper. It was hand tinted with photo oils and then mounted on a standard commercial matt board. I don’t know where the photograph was taken, or exactly when, but certainly it was taken some time in the first half of the (20th) century.” 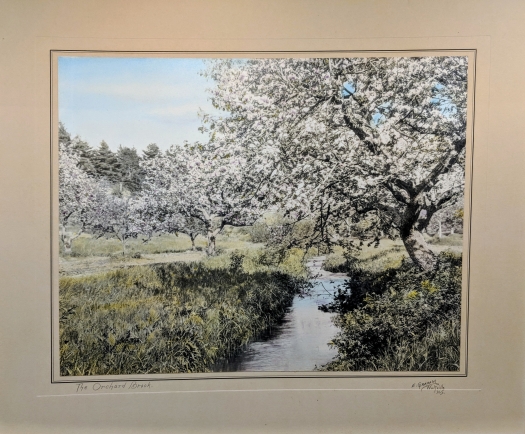 “The Corner Brook,” an original Edson Graham hand-tinted color photograph. The photograph was discovered in Ontario by an antique dealer.