Occasionally Larry Keddy looks back on the time in his life when he seriously considered becoming a professional drummer.

This was in 1950 and he was about to graduate from Acadia University with a Bachelor of Science degree. While there he had drummed with the University’s renowned dance band, the Acadia Gentlemen of Swing. “This was well into the swing and dance band era. Since high school, I’d been playing with bands and I was leaning towards taking it up full time.”

Instead, Keddy had second thoughts and opted to continue his education by studying towards an engineering degree at the University of New Brunswick; there he continued to drum with local dance bands until graduating in 1957. His degree in civil engineering took Keddy to the Ford Motor Company in Ontario and there he continued to drum in dance bands.

Keddy played the drums throughout an era few of us remember today, the era of Saturday nights in Annapolis Valley community halls when saxophones, clarinets, trumpets, drums and pianos played dance music that in its heyday was called swing. This was the period when big bands the likes of Artie Shaw, Tommy Dorsey and Benny Goodman held sway on the national stage, creating memorable dance music and songs that are still cherished today.

The big band or swing era developed in the United States in the 1930s was dominant in the 1940s and into the early years of the 1950s. In a way, Larry Keddy’s career as a drummer parallels the rise and decline of the swing band era; he was about 16 when he started to drum in Berwick in the 1940s and he played for various local bands until he went to Acadia. There he took over the drums for the 12-piece swing band. Keddy recalls that the Acadia Gentlemen of Swing played the music popularized by the likes of the Glen Miller and Duke Ellington bands “and the dance floor was always full.”

Keddy’s idol during his years at Acadia was Gene Krupa, who was renowned for his drum solos. He recalls that he played in Krupa’s style as best he could and like the famous drummer, when he soloed, everyone stopped dancing and “would crowd around and just listen.”

During his years at Acadia Keddy found time to play with a number of local dance bands from Windsor to Digby – at places such as the Starlight Room at Evangeline Beach, the Pines in Digby, Kentville arena’s Icetop Café, and Turner’s Dine and Dance in New Minas, all dance band venues remembered and cherished today by senior generations. “Most of those places we played didn’t have budgets for a large band, so they mostly hired five- or six-piece groups,” Keddy recalls of those days. “Those smaller bands usually consisted of a sax, trumpet, clarinet, piano and drums.”

Larry Keddy played the drums in swing bands for about three decades. Ninety-one years old today, he looks back on a drumming career that began when swing was at its peak. While the golden age of swing was waning on the international stage when Keddy graduated from UNB, it was still popular in the Maritimes. Keddy found numerous bands to drum with in the 1950s and 1960s as his career as a civil engineer took him to Ontario. Swing music was still popular when he returned to Nova Scotia in 1971 and when he retired to Kentville in 1988, there were still calls for a drummer with his experience.

Keddy’s career as a drummer wound down in the 1980s and today, more than 40 years later, he still cherishes his participation in the swing band era. “It was a wonderful time,” he says, “and there’s no doubt in my mind that the swing era had the greatest music ever. Of course, every generation says that, but the big band era has never been matched since for perfection and excellence in the world of popular music.”

Larry Keddy today. His career as a drummer paralleled the rise and decline of the swing band era. (Ed Coleman) 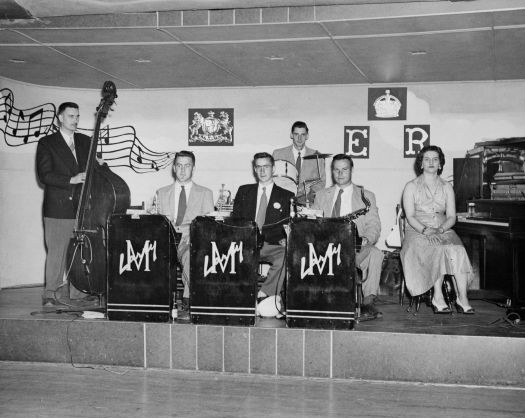