Most history books deal with wars, revolutions, mass movements of people and significant social upheavals. These books rarely mention the impact people have had on the environment, but one or two exceptions immediately come to mind. Locally, the dykeing of areas such as Canard and Grand Pre by Acadian and Planter settlers figure largely in our history and has impacted on the habitat in numerous ways.

In the book, A Natural History of Kings County, the authors tells us of various ways the Acadians and Planters introduced changes in the natural habitat of this area; this for the most part isn’t “history.” All kinds of plants and a variety of trees were introduced to Kings County, first by the Acadians, then by the Planters, and later by an assortment of individuals who left little or no record of their dabbling with nature. As for the effect some of the introductions have had, we simply have to look at the apple industry, which started with the Acadians introducing six or seven types of apple trees.

As for trees other than the fruit bearing varieties, several sources indicate that some of our elms, poplars, willows and beeches among others were introduced. I have no idea how some of these introduced trees and other plants figured in the history of Kings County but surely there was some impact, even if it was minimal.

Some of our introduced trees came from far away places; and as trees go, some are unusual. Take, for example, a different kind of tree found growing here and there around the county in residential settings. Locally it’s known as the umbrella tree – for obvious reasons since the mature tree is shaped like an umbrella. One of these trees can be found in Greenwich, another in New Minas. This is the Camperdown Elm or Weeping Elm, and it’s unusual because of its origin and uniqueness.

I first heard about the Camperdown from my wife, Lorna. One of these trees has been standing on a residential lot for more than half a century and Lorna always pointed it out when we drove through Greenwich. Intrigued by its name (which Lorna found in an old gardening book) I hit the Internet and learned that the tree (actually a branch) was first discovered around 1835 growing along the ground in Scotland. Apparently the gardener who discovered it realized its unique nature, that it was a mutant. The tree was named after The Earl of Camperdown; it became a fixture in Victorian gardens, says one source, since it satisfied the British passion for curiosities. It was often planted, says another source, when stately, elegant landscaping was desired.

I’d like to know how and when this unusual mutant reached Kings County. While at least one local nursery has it as a grafting from time to time, the tree in Greenwich appears to have been in place long before such commercial enterprises existed. Most likely it was grafted privately and perhaps, I like to think, it came right from old Scotland. Search on the Internet, by the way, and you can find a photograph of the original Camperdown tree. 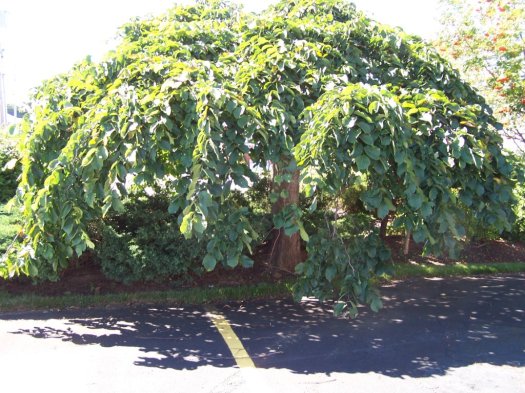 A typical Camperdown tree with its distinctive umbrella shape. This one grows along Commercial Street in New Minas. (E. Coleman)