On February 22 in 1888, some 36 citizens of the recently incorporated town of Kentville met in Chipman’s Hall to organize a “Fire Company”.

The minutes of that first meeting 125 years ago, of the Kentville Volunteer Fire and Protection Company, were recorded by R. L. Masters who was appointed secretary.  Those minutes are still extant; reading them, you’ll find that present were Calkins, Websters, Eatons, Ryans, Starrs and Nearys, all names among others synonymous with the future prosperity of the town.

Actually, you can read those minutes if you wish.  They’re preserved intact in the fire department’s museum along with various souvenirs, handwritten documents, photographs, old firefighting equipment and other artefacts the fire department collected and preserved since 1888.

Yet while the fire department had carefully been saving its records from day one, it apparently wasn’t until 1998 – the 100th anniversary of the department – that serious thought was given to organising and cataloguing everything and creating a museum.   At the time, most of the collection was simply occupying storage space.

During a period of renovations in the anniversary year the department decided it was time to make room for a museum.  A museum committee was formed with Art Hamilton as chairman, John Durno and long-time firefighters William Horton and Starr Williams.  In the book published to celebrate the department’s 100th anniversary, Art Hamilton notes that “being new at this sort of thing,” the committee wasn’t sure where to begin.  Assisted by Art Pope, who was curator of the Kings County Museum at the time, the committee started by sorting and numbering photographs collected over the years.

According to the anniversary book, the museum first occupied limited space set aside over the washrooms.   Now, 25 years later, the museum is on the ground floor in spacious quarters and much of the historical material the department amassed in the past 125 years is on display.   From what at first must have been a hodgepodge of memorabilia, the museum has evolved into a magnificent display of firefighting equipment.

I can attest to this after a recent tour of the museum with Cathy MacKenzie.  For the past eight years, MacKenzie has been working part-time at the fire department museum putting some finishing touches on the museum collection. One of the pieces of firefighting equipment MacKenzie showed me was a 1929 ladder truck, used by the department from 1930 to about 1949.  There’s quite a tale behind the truck.  Originally purchased by the department in 1930, the vehicle saw service until 1949 when it was placed with the Nova Scotia Sanatorium fire department.  Sold in 1963 to the Port Medway fire department, the vehicle eventually ended up in Waterloo, Ontario, where it was restored by Don Edwards.  In 2011, Edwards donated the vehicle back to the Kentville fire department where it can be found today in showroom condition.

One of the oldest pieces of fire fighting equipment in the museum is a hand drawn hose cart.  Purchased in 1888 and used until 1920, the hose cart required four men to pull.  Like the 1929 ladder truck, the hose cart stands gleaming in the museum, looking brand new, like it just came out of the factory. 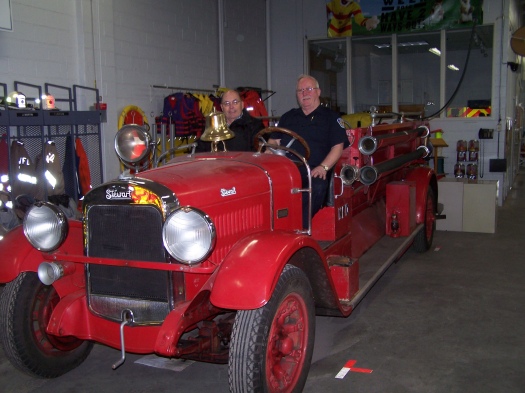 Showroom Condition – The 1929 Stewart ladder truck with Art Hamilton, left, and Carl Knox aboard. The ladder truck, which was restored to like new condition, is on display at the fire department museum. The truck was in use about 20 years before being turned over to the N.S. Sanatorium fire department. (Ed Coleman) 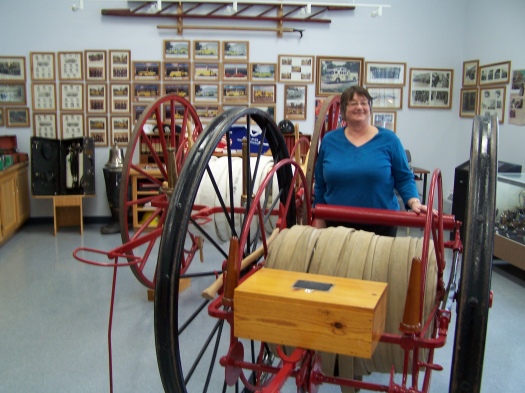 Cathy MacKenzie stands in the section of the fire department museum housing old hose wagons. The wagons were in use at least 100 years ago and were hauled to fires by hand. (Ed Coleman)