The province announced last year that the bridge over the Cornwallis River, in downtown Kentville, would be replaced in 2016. There’s speculation about when the bridge was first built. Was it Acadian or Planter or what? Here’s some interesting background on the bridge in which this question isn’t quite answered.

In 1895 probate court judge Edmond J. Cogswell convincingly argued in a Kentville newspaper (the Western Chronicle) that the town owes it existence to a “geological formation (that) is very peculiar.”

What Cogswell meant was that geological forces had created a huge sandbank and a shallow ford – “the principal ford” on the Cornwallis river as he calls it- where Mi’kmaq and Acadian trails converged to take advantage of a crossing place. It was a natural place for an Acadian village to spring up, says Cogswell, and the village was located about where the town bridge spans the river. Also, said Cogswell, it was a natural place for a bridge to be built over the river.

Arthur W. H. Eaton in his History of Kings County also mentions the ford (caused by geological forces depositing an “enormous sandbank which narrowed the river”) where “naturally a village sprang up.”   While Cogswell says this village originally was Acadian, a seasonal Mi’kmaq encampment likely was there as well.

In his 1895 article Cogswell also writes that the Acadians built a bridge over the river at the ford. If this is so, this likely was the first bridge to span the Cornwallis River. If Cogswell is correct, it also means a bridge has spanned the Cornwallis River at this spot for well over 200 years. However, in his 1895 article, Cogswell contradicts what he wrote earlier about the Kentville bridge. In an 1892 article, also in the Western Chronicle, Cogswell wrote that “whether there was ever a French bridge or not I cannot find out, but I think there was not. I think the old ford was used, but very shortly after the English or rather Colonial advent a bridge was built. It was not built exactly at the old ford.” In the same article Cogswell said the first bridge on the Cornwallis River was built in Coldbrook on Lovett Road.

If this is confusing let’s just say that an Acadians bridge on the Cornwallis River, in what was to become Kentville, is disputed. In her book the Devil’s Half Acre, Mabel Nichols doesn’t mention an Acadian bridge, noting only that the Planters built one at the ford in the 1870s. Further on in her book Nichols says that the bridge was built “soon after the Planters came to Horton” and there’s a record of repairs being made to it in 1893.

Nichols doesn’t give her source for the 1870s or the 1893 dates but the Town of Kentville website quotes her as if this is factual. What we do know is that Cogswell writes in 1892 that there is no evidence of an Acadian bridge at the ford and in 1895 he writes that a bridge of Acadian origin was there. As noted, Nichols, writes that it was the Planters that built the first bridge, giving the dates mentioned above without telling us how she arrived at them.

We also know that the bridge existed before 1931 since newspaper records show this was the year it was improved upon and expanded. Brent Fox, writing in The Advertiser, gives 1931 as the year the old bridge was replaced. In an April 29, 1994, article Fox writes that the bridge was officially opened on October 13 and at the time was recognised as the widest traffic bridge in eastern Canada.

Quoting Mabel Nichols, Fox noted that when it was opened the bridge was given a coat of aluminum paint. “The massive trusses gleamed pleasantly on the landscape in their aluminum coat painting,” writes Nichols, which may explain why the bridge was dubbed the Silver Link.

I’ve scoured other sources referring to Kentville, the Cornwallis River and the town bridge and this is all I’ve come up with. In closing, I must mention what Kentville historian Louis Comeau has in his archives regarding the bridge. Comeau has a photograph of the town bridge, dated 1890. He tells me the photograph probably was taken by L. C. Swain who operated a shop called the Kentville Photographic Studio from about 1890 to 1892. This photograph establishes that the bridge was standing at least as early as 1890. 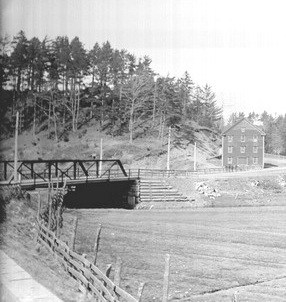 This photograph was taken circa 1890 by L. C. Swain, verifying that the Kentville bridge was in place at least 125 years ago. (Louis Comeau archives)