Just over 100 years ago, when he was still in his teens, Alexander Robert Stirling (1900-1996) took over the family farm in Greenwich and eventually devoting much of his life to growing fruit. Within a few years of taking over the farm, Sterling was operating a dairy – the Willow Hollow Dairy in Greenwich. On the same site he constructed a warehouse with an apple grader and this was his start in growing and marketing apples. Stirling soon was shipping apples to Maritime ports and as far away as England, all apparently within a decade or two of his taking over the family farm.

Looking back today, one has to be astounded by what Stirling accomplished in his lifetime. This is an amazing story, one only partly covered by the Stirling Fruit Farms website which notes that he opened his first roadside market in the 1940s. According to a historical sketch on Greenwich and environs in files at the Kings County Museum, the first market was located just inside Wolfville’s town limits, on the Greenwich side. The sketch, actually just a few notes, is credited to “Mrs. Burpee Bishop.” Edith Quinn’s book on the history of Greenwich (published in 1968) also contains detailed information on Stirling, which along with Mrs. Bishop’s sketch and interviews I conducted is the main source for this column.

I found from Quinn that Stirling once owned his own boat, The Trude, which he docked on the Cornwallis River and used to ship apples to points in Nova Scotia and New Brunswick. Stirling loaded apples on The Trude at the port in Wolfville, a dock used by many growers in the area until 1930 (the year the massive shipping dock at Port Williams was constructed).

In many ways Stirling was a pioneer, not only in the growing and marketing of fruit but in introducing many agricultural firsts to Nova Scotia. On the site of his dairy, Stirling built a warehouse with an apple grader and a cider press where he produced and marketed Red McIntosh Apple Juice. Nearby, Stirling set up a cannery under the brand name Annapolis Valley Canners, producing canned small fruits, salad dressing and chicken.

Other agricultural firsts mentioned by Quinn in her Greenwich history include operating one of the first gas storage units in Nova Scotia, designing a water grader and a boom sprayer for use in apple production and leading the way in the early use of bulk bins in the harvesting of apples. At one period, Stirling branched out in the retail world, incorporating Stirling Motors Ltd. in 1947, which sold farm machinery and small appliances.

Undoubtedly, Alexander Robert Stirling will best be remembered for the production and marketing of apples. Early on he set up fruit stands in several areas around Nova Scotia and New Brunswick, practically making apples and the Stirling name synonymous. Today, three generations later, the Stirling family is still growing and marketing apples on an even greater scale than ever before.

The old and the new: The first fruit market opened by Alexander Robert Stirling in the 1940s (above) contrasts with the farm market the Stirling family recently opened in Greenwich. 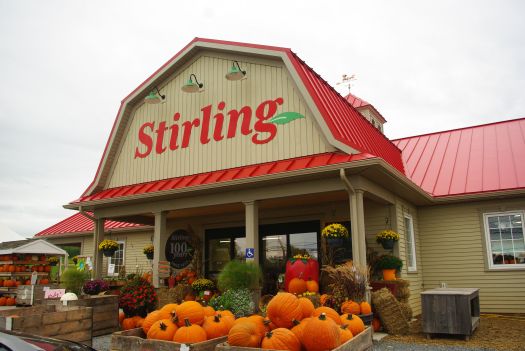