“Near the end of a steep curve on the Hall’s Harbour hill is a large, impressive house which once served as a hotel,” writes the late Hazel Roscoe in an undated document. The document, from a collection put together by John Sutton, tells the story of a hotel that once was famous Valley-wide for its salmon suppers.

As the document indicates, the hotel (or what was once a hotel) is on a tricky curve as you go down the hill to the harbour and it has stood there for well over a century. The building originally on the site was a house owned and possibly built by Thomas Parker. The house was purchased by James Watson who came here from Scotland in 1855. Watson was the lighthouse keeper at the harbour; he purchased the Parker house apparently with the aim of building a hotel on the site. Besides the Parker house, other nearby buildings were included in the purchase, one of which Watson used as a general store and a feed store. The right for Watson to operate a weir nearby along the shore was included in the purchase of the property.

A copy of Hazel Roscoe’s essay on the hotel is also on file at the Halls Harbour Historical Society. Diane Tedford-Litle kindly provided me with a copy of this document, which differed in that it included additional information, an update on the hotel’s history up to the present time.

Roscoe’s document tells us that James Watson remodelled the Parker house after purchasing it, adding the upstairs section. Watson opened the house as a hotel in 1902 and it flourished as such for many years. In the year it opened, James Watson hired Deborah Crowell (a widow) to manage the hotel. From 1902 until 1929, Crowell “made the hotel famous for its Sunday salmon dinners,” writes Hazel Roscoe. “Many people came from all over the Valley by horse and wagon to spend time at the hotel.

“Mrs. Crowell brought her four daughters with her and they helped with the hotel. Their names were Edith, Minnie, May and Abbey. May later married John Roscoe of the Harbour.”

Reading Hazel Roscoe’s account, one wonders if there was a family connection between James Watson and Deborah Crowell. After all, Crowell came from some distance away (Barrington) after the death of her husband. Unfortunately, Roscoe doesn’t tell us when the hotel ceased operation or what became of James Watson, noting only that when Crowell died, her grandson, Murray Roscoe, acquired the property.

There is conflicting evidence on when the old hotel began operation. A plaque on the building reads “Ye Olde Hotel Circa 1855,” indicating that somewhere around that year the hotel opened. Yet we read in Roscoe’s document that much later, in 1902, James Watson constructed the hotel, using as its base a house that was on the site. We read as well that Deborah Crowell made the ambience of the hotel famous between 1902 (the year Watson built the hotel) and 1929. In a way, this indicates the hotel ceased operation in 1929 – perhaps after the demise of James Watson for whom we have no death date.

Hazel Roscoe’s document indicates that between 1967 and 1970 the hotel changed hands twice. In the late 1980s, the property was acquired by Diane Tedford-Litle and she and her husband Ed updated the hotel building and ran it as a bed and breakfast from 2001 to 2006. Despite its age, today the old hotel looks to be in excellent condition. However, like many old county buildings, there are tales of “strange noises and presences being heard and felt (there) from time to time.” 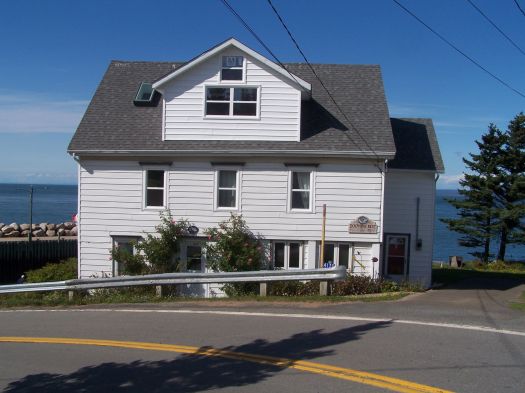 A magnificent building today, what was once a hotel stands at the bottom of a steep hill in Hall’s Harbour. (Ed Coleman) 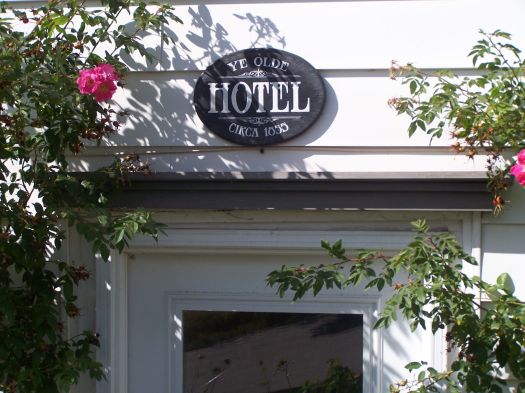 A plaque on the former hotel indicates the building is well over 150 years old. (Ed Coleman)